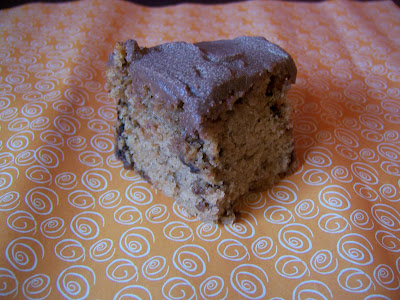 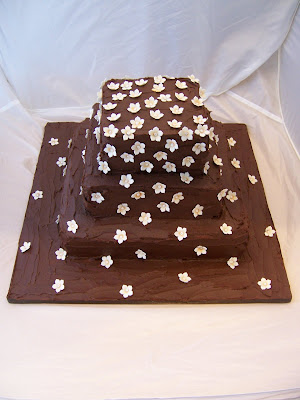 Whoops! Didn't realise it was 5 past 12 - I am 5 minutes late for posting this week's Tuesday With Dorie post - The group with members all from all over the world where we all bake the same thing and post our results on a Tuesday/Wednesday-just! This week it was the turn of Cinnamon Squares chosen by Tracey of Tracey's Culinary Adventures

My results as you can tell from again a rubbish pic are just average - I have to say I wasn't disappointed as I didn't really expect much from this recipe but I don't think I'd make again - It was just like a mocha cake which really don't excite me that much. My choc/coffee layer sank to the bottom (which has never happened to me before - I feel like I have joined a gang!) The choc frosting layer did make it better and it will probably all get eaten. There are far better pics from other bakers though so dont take my word for it, hop on over to the rest of the gang

I haven't posted for over a week so I have a massive backlog of cake posts - I thought I would drop one in here just to try and improve the look of this post! This is a Wedding cake made from vanilla sponge with choc buttercream and choc fudge topping and edible blossoms - For a lovely couple, Joanne and Andrew - Good Luck to them both!
Posted by Casa Costello at 00:07

Thanks for baking with me this week! Sorry you weren't crazy about the cake but glad you gave it a shot!

I'm sorry your Cinnamon Squares didn't excite your tastebuds much, but it sure looks tasty!

Your wedding cake is beautiful - a chocolate lover's dream!

I loved the cinnamon cake part of this recipe. My ribbon sank to the bottom as well. I think perhaps the chocolate was too heavy or something. I really did like the flavour of the cake though. Can't wait to see your other cake creations!

Sorry this wasn't thrilling for you, but it is fun for us all to bake together! That wedding cake is gorgeous!

Ho i em crazy for the cinnemon coffee cake!