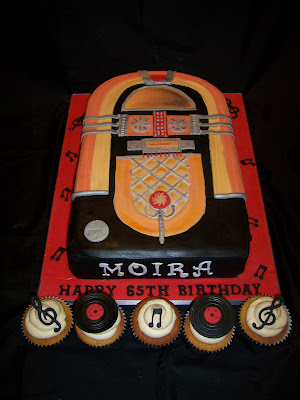 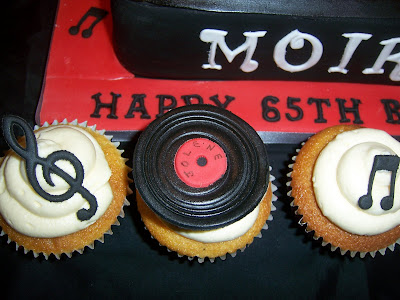 This jukebox cake was massive!! This was a bunch of people who went all out to arrange a party for their friend. Everything was co-ordinated to a Rock and Roll theme and the outfits they wore for the party were AMAZING! I believe the cake went down a storm aswell as the cupcakes which all had either musical notes, treble clefs or 'records' all with different song titles. I know Dolly Parton isnt exactly Rock and Roll but Moira (the birthday lady) is a massive Dolly fan and wanted her incorporated. The records were completely edible and varnished with edible varnish. I was slightly depressed though when my 7 year old daughter asked what a record was - how old do I feel?

www.aardvarkcakes.co.uk
Posted by Casa Costello at 14:44

This cake is amazing - love it!

Stunning! I love it too!

What a cake!!! Absolutely great!

Kelley at My Island Wedding said...

can't wait to check out more!

Amazing talent, one of the coolest shapes I had ever seen on a cake.