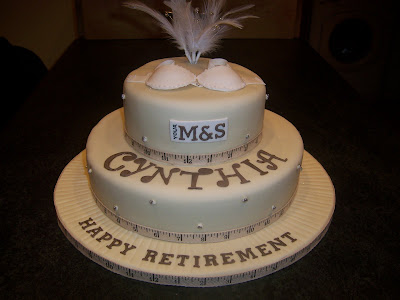 I know I have said it a million times but I love this cake! One of my last cakes before going on maternity leave for a good chunk of 2011 (don't worry I still have loads of cakes to post and I'm sure the cakes my family get me doing are more than enough blog fodder!)

This cake is for the lady who was retiring from her job in Marks & Spencer as the bra-fitting expert. She was really nervous about the party that was being held for her as she had never had a party solely in her honour before. When we dropped the cake off, the room looked fabulous and it was lovely to see everyone getting stuck in helping her decorate it. I was talking to my sister-in-law's Mother-in-law (work that out if you can!) last night and she said she happened to be at the party and that everyone was talking about how fabulous the cake was (and she didn't even know it was one of mine) and that the party was a huge success.

Both tiers were vanilla sponge and the M&S label and the bra were edible with the addition of a couple of diamontes - because everyone's underwear should have bling. The only brief (get it?) I had was to to include a tape measure which was great as I had bought the tape measure ribbon years ago and was desperate for an excuse to use it...only one problem, I couldn't find the blasted thing for a week and a half! Luckily it turned up exactly where I thought it was going to be the day before the cake was due!
Posted by Casa Costello at 23:42

How utterly FABULOUS - You are so clever! I love the colours too - it takes me straight back to the 70's and being dragged around M & S by my mum!! - sure that those colours were their brand colours back then - or maybe it all just felt beige... So fab- well done you x

That was the PERFECT cake for her retirement. I love the measuring tape around the bases and the soft colour. It's wonderful cake art, you clever person.

How fitting! (Get it?). But oh so fabulous, loving the ribbon, how do I not know of this wonder already?