Tutorial - How to make an Edible Gruffalo 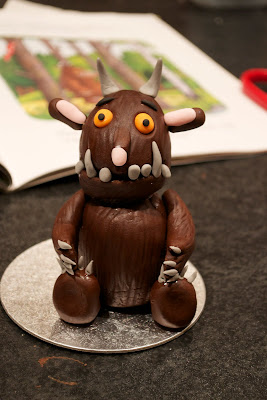 Earlier this week I posted a picture of my Gruffalo Cake and the response was incredible. I had many a discussion on Twitter about people making cakes for their children's birthdays and decided to post some tutorials of popular ideas for children's cakes.

The first being a Creme Egg Gruffalo: My cake had to travel from St Helens to Leeds and I knew the Gruffalo was not going to be eaten so was safe to insert a cocktail stick to keep the head on - normally I would use a piece of pasta to stick the head onto or even just make it a few days in advance so the head will just stick. I used sugar glue to stick everything together - make your own or just use cooled boiled water. 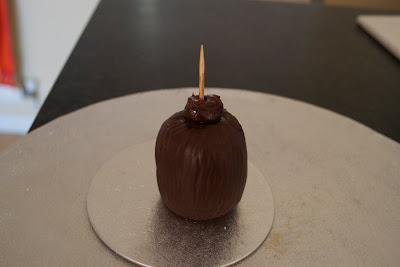 I used Chocolate Flavoured Fondant Icing. Roll out a piece of fondant, paint the creme egg with sugar glue and cover with the fondant. Make the seam at the back and smooth down the joint with your finger. Mark the 'body' with either a veining tool or a knife. Attach a small ball of icing for the neck. At this point insert the cocktail stick/pasta if you are using one. 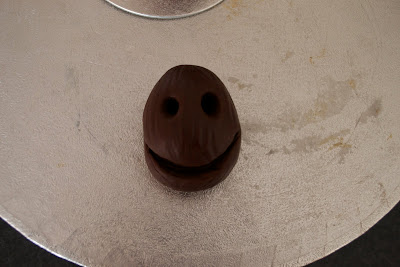 Next get a ball on fondant slightly smaller than the body and roll the ends until it is an oval shape. Cut a mouth and open it - the gruffulo has a BIG mouth! Make the same marks for fur as on the body and make 2 holes for eyes - I use the end of a small pointy rolling pin (if you haven't got one, you could use the end of a clean paintbrush) 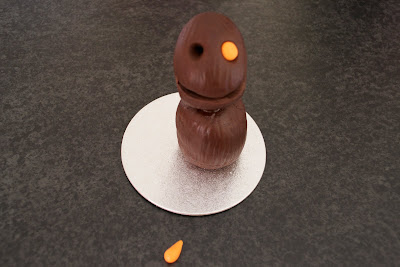 Stick the head on top of the body. Get 2 small balls of orange fondant icing - make one end of each pointy and stick into the eye sockets. You shouldn't need glue for this but if you do only use a tiny bit. Add a tiny black dot of icing to each orange eye.
Make 2 small sausages of brown for ears and attach to each side of the head. Put a tiny bit of pink icing over the front of each ear. Roll little grey sausages for teeth and attach some to the top lip and some to the bottom lip. 2 slightly larger grey sausages, pointy at one end make the horns on top of the head. A thin sausage of brown icing makes the nose with a small pale pink ball. He also needs a teeny weeny ball of green on top of the pink ball for the wart on his nose. He also needs 2 VERY thin black sausages for his eyebrows. 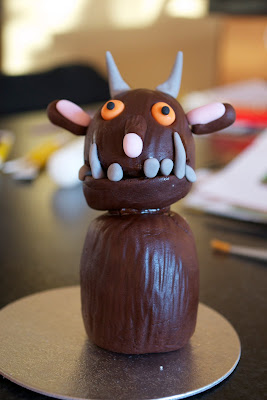 Make his legs and feet all-in-one with a long sausage folded just past the middle for his foot. Flatten down the foot bit and try to make some more markings again for his fur on the legs. The legs and feet will help him keep upright. 2 more brown sausages for his arms - cut into fingers at the end and try to round off the edges (back of a knife will do this) and attach to the body. 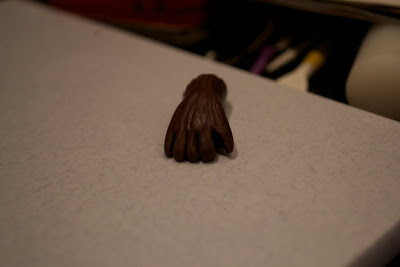 Tiny grey sausages made really pointy at the ends are attached to his hands and feet for claws. Loads of spikes are then attached to his back (the ones in the book were brown so I did them brown but my 4yo is convinced they should be purple - its up to you!) 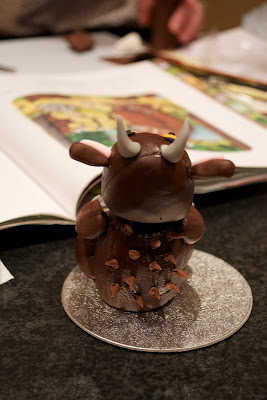 And he's done and so is my first tutorial. How was it? I think The Gruffalo is quite a hard cake topper to do so maybe next time I'll go for something a little easier - any requests?
Posted by Casa Costello at 23:33

Brilliant! I'm absolutely rubbish at this kind of thing, but I think with a good, clear step by step like this even I'd be tempted to have a go! Thanks x

He's fantstic, thank you so much for the step by step tutorial. Now I need to kidnap a nephew or niece and make them a Gruffalo brother or sister :)

This is great thanks! I'm making some of the characters for a cake this week, this is very helpful! Thank you!

I’m the Community Manager with Anagram Interactive, where we specialize in connecting established brands with prominent bloggers. We’re currently working with Paperless Post, a company that designs customizable online and printed stationery, to show that communication can be personal and well-designed regardless of the medium.

Paperless Post has partnered with several world-famous designers and lifestyle brands, including kate spade new york, Oscar de la Renta, Jonathan Adler, and Rifle Paper Co., and has delivered over 85 million cards to date. Since you have such an engaging and beautifully-designed blog, we’d like to offer you 600 Paperless Post digital Coins (a $60 value) for free to try out our online service and write about your experience.

We really think you’ll enjoy Paperless Post and can’t wait to hear what you think. Please let me know if this is something you’d be interested in and I’ll show you how to get started.