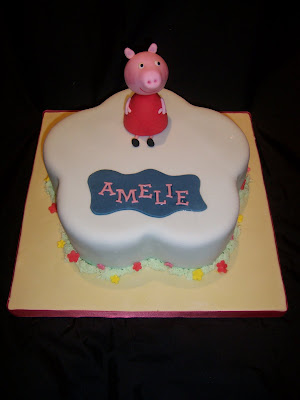 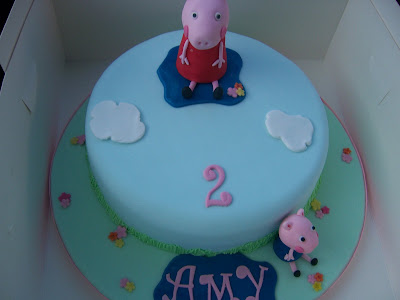 Well I promised a Peppa Cake next but then I forgot to take a proper picture before I delivered it (I actually have done 2 recently but forgot to take a picture of either) - I don't think a quick snap whilst travelling in the car counts but I will post it anyway. I wasn't driving BTW!

I have also posted a picture of an older Peppa Pig cake - I love doing them. I have recently started making the Peppas using a walnut whip (From M&S as they are a bit smaller than the normal ones - and a lot cheaper!) I would prefer to eat a walnut whip than solid icing anyday.

Peppa is in the news today - Her and George have been spotted in the car without seatbelts - how horrendous - because us parents would automatically think that if Peppa doesn't have to wear a belt then our children don't either wouldn't we!!??**!

I intend on making Easter Peppa Pig figures and hope to post soon.

Coming next - Gogo Cake and the delivery from hell!
Posted by Casa Costello at 10:54

Cake for the Date said...

this is the cutest thing I've seen in a really long time - I love it.