Wake me up before you GoGo! 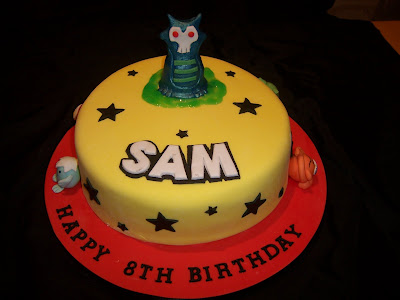 Ha! This post is nothing to do with the delectable George Michael but the children's toy craze that frequently has me mithering newsagents up and down the land. 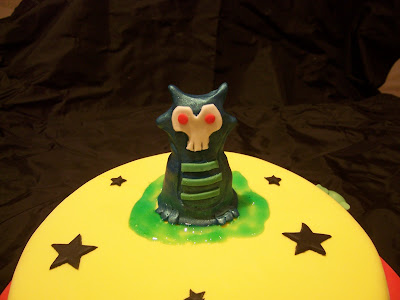 For non-kiddy people, Gogos are a massive range of tiny plastic creatures that all have something individual about them - My latest cake recipient is a young man named Sam who by all accounts is even more obsessed with Gogos than my 2! His favourite is the guy on top of the cake names Rein-W whose 'superpower' is to zap people with blue water - therefore why he is shiny blue too! To get the shimmery blue colour I painted on Ice Blue Dusting powder which transformed him. Thankfully Sam recognised him straightaway and I got a lovely message from his mum later on saying how overwhelmed but delighted he was with his cake and they kept sneaking a peek! Aw! 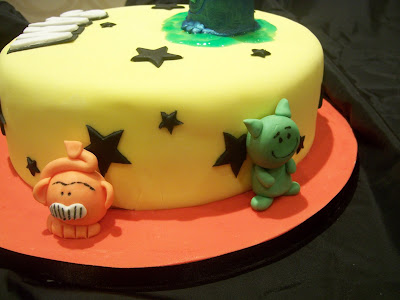 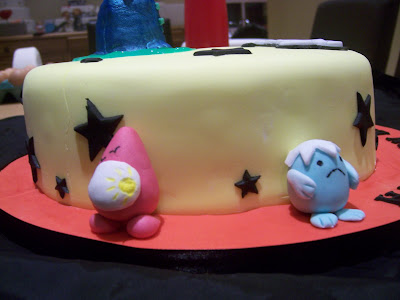 The other creatures around the side are gogos too from the other Series (es) - what is the plural for series? There are 4 series with about 60 gogos in each - If my girls think they are collecting them all they've had it!

The delivery of this cake was probably one of the most traumatic I have ever had - and there have been many traumas! It coincided with the worst snow and ice that this country has seen for nearly 30 years and the birthday boy lives in a quiet road that had obviously had the right amount of walking traffic to make the pavement lethal - to make it even worse I was on my own with my 3 year old who had spent more time on her bottom than on her feet that day - we skidded and slided to the front door though and happily the cake was delivered in one piece - I will never forget it!

Hope you like! Next time...Naked Ladies!
Posted by Casa Costello at 15:29

This cake looks incredible. So creative!!!

Wow I know your post nothing to do with George Michael, and I gotta say the same because I wanted to talk about generic viagra so I think this isn't the moment to do it.